← more from
Thrill Jockey Records
Get fresh music recommendations delivered to your inbox every Friday.
We've updated our Terms of Use. You can review the changes here.

by The Fiery Furnaces 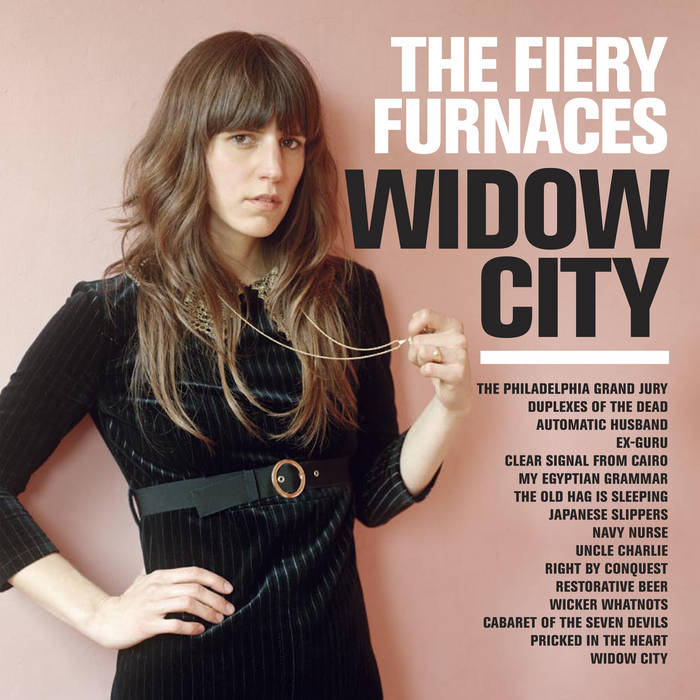 The lyrics were written by means of a method derived from the Baccalieri children's use of a Ouija board in season four of The Sopranos, and, further, a mention of Scripts for the Pageant in an article in the Windy City Times. What this means is as follows. Between seven and eight in the morning the brother in the band would pretend to ask a Ouija board what his sister would like to sing about. He would then pretend that the Ouija board gave him various answers. After this was accomplished he would pretend to write the answers down.

This strenuous work of the imagination, or Imaginary Work, could occur as many times as once a month.

Or sometimes, in the afternoon, the tapping table might tell the brother to stare across the room at a book that looked, for example, like a bible. "Imagine what it said," it said, it seemed. The strict subjugation of an imaginary bible to an imaginary board game could have produced the lyrics to, for instance, the title track.

The sister's job consisted of this. She would clench in her fists the names of selected lady magazine authoresses from the years 1968-1976 and, extending out her index fingers, type up what the old ladies “told” her. Or rather, “told” them, meaning her index fingers. She'd then send the notes to her brother, who would modify and add to them according to what he imagined were their "secret intentions." If the sister objected, the brother would assign responsibility to the Ouija board.

In a word, therefore, to sum up, the lyrics were caused, so to speak, by:
1. Ads, for instance, at back of design magazines from the early seventies.
2. The cultural pages, if any, of local community minority or alternative lifestyle newspapers.
3. Depictions of grieving children using the aforementioned Ouija board.

The music to Widow City was composed by the brother in the band in the following manner. In his right hand, he would hold the broken jewel cases of scratched, and therefore discarded, Van Morrison cds, while with his left hand he would play the piano.

Alternatively, he would stare at the Atlantic labels on Led Zeppelin LPs in the dark and write down the tunes inspired thereby, also in the dark.

This procedure left much to chance. The tunes to Widow City ended up not much like Van Morrison or Led Zeppelin. Instead, they sounded, to the brother, as if engaged in some sort of general Paul McCartney-izing, though with a different drummer.

The drummer on this record is Robert D'Amico, 37, who has played live with the Fiery Furnaces the past two years. The personality of his playing is patently present on this particular platter. The disposal of his talents across the surface of the album makes the most obvious difference with past band product.

The Paul McCartney-izing mentioned previous must have to do with how simple and schematic the tracks are. Simplicity and schematicism are most successfully exaggerated in "Clear Signal from Cairo." The words to this song, unlike many of the others, serve to further emphasize, rather than hide, those characteristics.

By the way – Eleanor especially likes, and especially her performance on, "Navy Nurse," especially since it does sound something like Van Morrison or Led Zeppelin. Sort of; and "Navy Nurse" has an oblique relation to an earlier Fiery Furnaces' tune/ditty.

By the way – as for comparisons with other records/acts, Bob "Wicker Whatnots" D'Amico once wrote to me that the stuff reminded him of King Crimson's Lizard album and Larry Harlow's El Jardinero del Amor. He has also repeatedly "whispered" to Eleanor that "Restorative Beer" is a hit single. The mastering engineer (the mastering engineer on all the Fiery Furnaces records except the first one) Joe Lambert, when prompted, said that a small section reminded him of Gentle Giant. The recording engineer (recording engineer on the last three Fiery Furnaces' albums) Bill Skibbe said, unprompted, that the song "The Philadelphia Grand Jury" reminded him of Ike and Tina Turner's "Nutbush City Limits". And the imaginary record producer, the producer of the record (see credits) often pretends to be when talking in a talk-back microphone--Jimmy--thinks the record sounds like, "A million seller."

The record's string, woodwind, and brass sounds were played on a Chamberlin. If one doesn't know what that thing is, one can no doubt find out. The brother plays every instrument on the record save the drums. The sister sings every word on the record except a few.

As on past Fiery Furnaces' albums, the backing tracks have a narrative aspect, excuse the expression. For instance, the long 'bassoon' and altered tabla part in "The Philadelphia Grand Jury" might indicate the singer in the song's waiting for the word (verdict). The loud guitar-drums-and-Chamberlin 'thunderstorm' part towards the end of "Ex-Guru" indicates the thunderstorm brought about by the jilted ex-guru. The synthesizer filtering of the acoustic guitar in "Duplexes of the Dead" indicates the odd light that filters through the dirty curtains a duplex of the dead would no doubt have. The swelling melody at the end of "My Egyptian Grammar" indicates the pride that likely swells up in the breast of a blue jay referred to therein. The monkey and cow noises in "The Old Hag is Sleeping" indicate the rooster at dawn. The guitar solo at the end of "Cabaret of the Seven Devils" counts to seven. The train sound effect in "Japanese Slippers" indicates a train. And so forth.

To sum up, the music on Widow City sounds lively, tuneful, simple/schematic, like a variety of previous records, with loud electric guitars, with very over-compressed bass guitars, drum-solo-having, Chamberlin-ized, and storytelling-ish. And again,

Matthew Friedberger, 34, and Eleanor Friedberger, 30, are very confident that Widow City will not only appeal to, but find use with, the causal rock-n-roll fan both older and younger than themselves.

The band has no advanced degrees or criminal convictions. Its charitable activities are none at present.

Widow City was recorded in January and February of 2007, often in heavy snow, everyone stranded as if "immobilized by powerful chains of molecules." For further information, see the credits and lyrics on the album packaging or provided in this kit.

The Fiery Furnaces are Eleanor and Matthew Friedberger. They formed the band in New York City in 2000. Their first album, Gallowsbird's Bark was released by Rough Trade Records in 2003. Their last single, Down at the So and So on Somewhere was released by Third Man Records in 2020. And a lot happened in between. ... more

Bandcamp Daily  your guide to the world of Bandcamp

Semiratruth joins the show to discuss their latest release, "loading..".